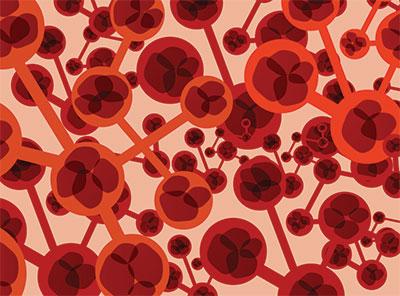 The level of activity of a cellular signaling pathway correlates with the degree of social and cognitive impairments in children with an autism-linked genetic abnormality, according to unpublished research presented Sunday at the 2013 Society for Neuroscience annual meeting in San Diego. Biomarkers are objective biological measurements — such as the level of a certain chemical in the blood — that would enable scientists to reliably identify individuals with autism or predict how these individuals will fare over the long term. Researchers have struggled to identify biomarkers for autism, aiming for earlier diagnosis of the disorder, or to pinpoint subgroups that are most likely to benefit from specific therapies. In the new study, Sherr and his colleagues collected blood from children who carry a deletion of the chromosomal region 16p11.2. They measured the levels of proteins involved in a signaling cascade known as the MAPK/ERK pathway in these blood cells. The work is part of the Simons Variation in Individuals Project, an effort to comprehensively study a large number of individuals with deletion or duplication of the 16p11.2 region. Read the news article here.