Home » Connecting the Dots: Mapping the Brain in a Common Form of Autism
Previous Pause Next

Connecting the Dots: Mapping the Brain in a Common Form of Autism 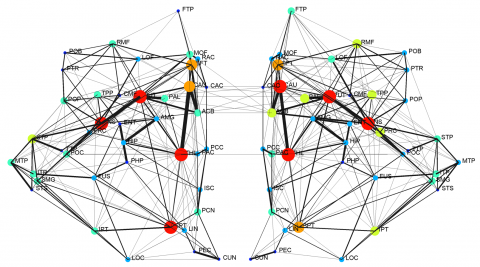 Mapping the brain is emerging as the new frontier in science, and unlocking its mysteries promises to deliver fundamental new insights into human cognition and diseases, ranging from autism to depression to addiction to Alzheimer's. But the overwhelming complexity of the brain offers a significant challenge.The brain is an almost incomprehensible maze of long cells called neurons -- 100 billion of them in all -- each one making up to 10,000 connections with other neurons. Unlocking this complexity will take years, multidisciplinary approaches, new technology and hard work.

What you see here is state of the art for brain mapping today: a three-dimensional model of the wiring of the human brain, known as a "connectome", developed by Julia Owen, Pratik Mukherjee, Elliott Sherr and their colleagues at UC San Francisco and UC Berkeley. They used hospital MRIs and the mathematical tools of network analysis to trace the global connections within the brains of seven adults who have a genetic malformation that leaves them without a structure called the corpus callosum, which connects the left and right sides of the brain. This malformation is one of the top genetic causes of autism and was part of the mysterious brain physiology of Kim Peek, the remarkable savant portrayed by Dustin Hoffman in the 1987 movie "Rain Man." The larger and redder circles represent the "hubs" of the whole-brain network -- the regions with the greatest number of connections to other regions.This is the first time that the connectome of a human brain malformation has been mapped, and it has revealed some of the unique anatomical features behind this genetic cause of autism. Read the entire news article here, or the published journal article here.